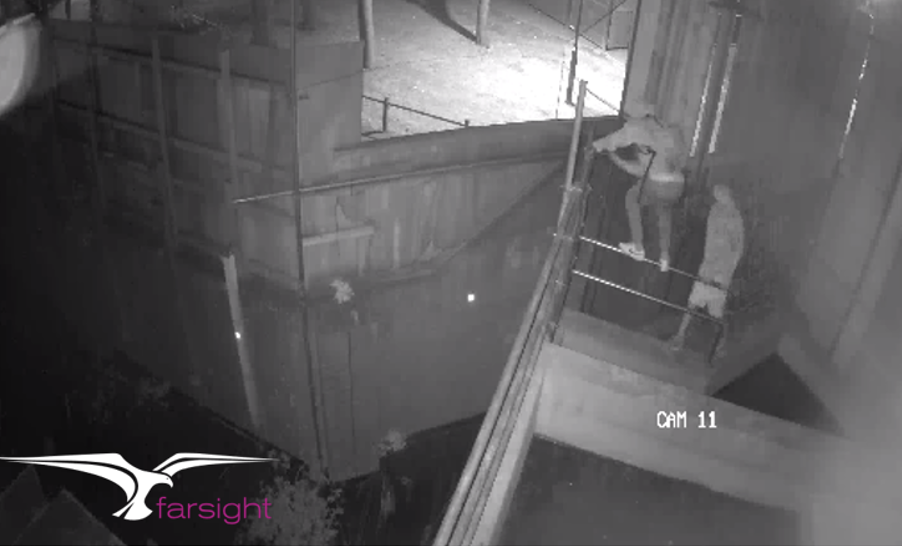 Increasingly, construction sites are being targeted by thrill seeking trespassers calling themselves urban explorers.  These so called urban explorers trespass sites to practice their climbing and take videos of their antics to share on social media – causing risk to not only themselves but to construction firm’s premises, assets and people.

Instances just like the image above, are all too common. This image was captured on camera by Farsight’s eagle eyed remote monitoring CCTV operators for our clients Permanex who are a leading construction and temporary site security provider.

With an increase of 50% in intrusions during lockdown alone, Construction sites are blighted with the constant threat of trespass, plant theft, criminal damage and even arson which cost them £400 million a year according to the Chartered Institute of Building.  That’s without the addition of ‘urban explorers’ trespassing on private sites to perform their reckless stunts on scaffolding, cranes and site equipment – which can be dangerous places to play around in.

What is an urban explorer exactly?

“Urban exploration (often shortened as UE, urbex and sometimes known as roof-and-tunnel hacking) is the exploration of manmade structures, usually abandoned ruins or hidden components of the manmade environment.”

Urbex has become a trend fuelled by social media sharing, generating ten of millions of views as these fearless adventurers and daredevils explore forbidden areas and document their actions with videos and photographs.

The old adage “take nothing but photographs, leave nothing but footprints” has often been applied to urban exploration. However, the recent rise in popularity of the hobby has brought claims that this rule is no longer being followed which is greatly concerning, especially for the construction industry.

The dangers associated with urban exploring, especially at construction sites, are numerous – not just the risk of falling from dizzy heights.  These include: hazards such as unstable structures, unsafe floors, broken glass, stray voltage, entrapment hazards, or unknown chemicals and other harmful substances (most notably asbestos). to name a few.

You don’t have to look far to find a raft of media stories of injuries and even deaths that have occurred from urban exploring.

“Recent years have seen a spike in cases of urban exploration. These thrill-seekers put not only themselves but others at risk through their behaviour.

Construction sites are not playgrounds – they are potentially extremely dangerous areas where people can, and do, get injured or killed.

Working with our clients, through our own intelligence and via monitoring of social media, we have established those sites that may be at highest risk and have taken steps – including through the legal process – to prevent access by these groups.”

On the face of it, the urban exploration trend sets its sights on abandoned tube stations, historic & long forgotten buildings etc. However,  it doesn’t end there and increasingly construction sites are being targeted too as well as other off-limits commercial sites such as railway sidings, factories – even schools and churches.

Accessing many of these sites will involve trespassing which is a common law tort or crime  which has attracted critical attention across the news media – for good reason.

In their article Rooftoppers: The Urban Explorers risking arrest and Worse,  the BBC cited Dr Mark Wilde, School of Law, University of Reading who outlines the legalities of trespassing for the purpose of ‘urban exploration’:

What can Construction Sites do to deter urban explorer trespassers?

Of course, these unauthorised intruders don’t just endanger themselves at construction sites they gain access to, their actions also can threaten the safety of site staff, authorised visitors as well as assets, equipment and project continuity. Access from unauthorised individuals can undermine the valuable work done by landowners and contractors to keep their sites safe and secure.

Real Estate Law Blog reports that property owners owe a duty of care to visitors (even a trespassing one) if they are aware of a hazard on the premises which they believe the individual may come across and they should reasonably be expected to protect against.

A report published by the Construction Index: Failure to prevent thrill-seekers from breaking into construction sites looks likely to become a whole lot more expensive after a £1.2m fine was handed down highlights the challenges that construction sites face in managing their security and minimising these types of trespass. But what can they do?

From a physical security perspective property owners and contractors can add safeguards to prevent access to at-risk areas. These can include displaying visitor guidelines, carrying out regular inspections and risk assessments, installing physical security solutions such as fencing, gates and doors, access control, intruder alarms,  monitored CCTV cameras and even employing security guards. Some go as far as installing anti-climbing safeguards on their equipment too.

From a legal perspective, many contractors have been forced to seek injunctions to further deter  ‘urban explorer’ trespassers and protect the security of their sites.  If the injunctions are deliberately breached, the trespassers will be in contempt of court leading to potential fines or imprisonment – providing a considerable deterrent with criminal prosecution.

Some of the contractors who have sought injunctions of this nature to protect their sites include:

Optimising security measures at construction sites is of paramount importance, to prevent and react swiftly to breaches from trespassers, whatever their motivations.  There are many reasons for trespass from climbing things, opportunistic stealing of things, criminally damaging things or even burning things.  Each has its own level of cost and disruption, but discerning the difference between these motivations in real time as they happen is not easy, neither is keeping them out!

Farsight is a leading remote security systems monitoring station offering a range of solutions including CCTV monitoring, Access Control and Intruder & Fire alarm monitoring.  We work with security installers, contractors and site owners across the UK.  Our team would love to answer any questions you may have on discerning the right partners to work with and the solutions that may be right for you to keep your site secure. To speak to us, simply request a call back or drop us a line here: Contact us