Home » News » CCTV and Fire Safety: Would a fire at your site have been stopped in time without CCTV?

At 20:02 the Farsight CCTV monitoring centre received an alarm from a site in Aylesham, Kent. The alarm was raised from one camera only, which could have been the undoing of many other remote monitoring stations.

Our policy is to always check adjacent cameras when an alarm is received. By doing this, the Farsight security operators can be sure that they have scanned the entire site for any potential threats. So, if an alarm is raised from camera one, Farsight operators will activate camera one and scan the site from that camera’s angle. If they do not identify the cause of the alarm the operator will immediately begin to scan the site from other cameras placed in different areas, to identify the true cause of the alarm.

In direct contrast to Farsight’s thorough approach to alarms and unidentified causes, many other monitoring stations depend upon using one camera only.  This can leave the site vulnerable to hidden threats, which may have moved since the alarm or being unidentifiable in the original footage from that camera.

In this instance, Farsight’s use of adjacent cameras proved pivotal to the incident. 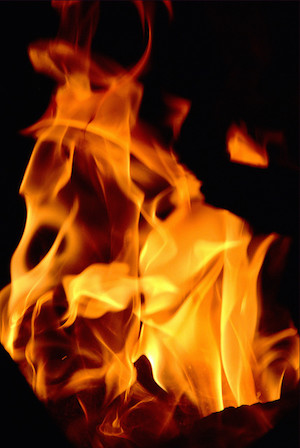 When checking the camera, which raised the original alarm, the Farsight operator could not identify any direct threats or any valid cause for the alarm to have been raised. Hence, he began checking adjacent cameras on the site and progressed to check cameras on the opposite side of the site.

On checking two cameras on the far side of the site, the operator noticed a skip was ablaze – dangerously close to the site’s assets.

Upon identifying the fire the Farsight operator reacted quickly to issue an audio warning, the benefits of which are two fold:

Seconds after issuing the audio warning, the operator was on the phone to notify the fire brigade that a fire had been visually identified on the site in Kent. This is an extremely important factor for many commercial properties: there are an increasing number of UK fire brigades that will not attend a commercial property until a fire has been visually verified. Without CCTV to visually verify signs of a fire, it could be too later before a key holder could arrive and confirm the threat.

You can read more about the changes to commercial property fire alarm response in our company news.

In this instance, the site was lucky to have had CCTV installed to verify the fire, and also to have used Farsight as its remote monitoring station in using multiple cameras. Once the fire brigade had been called, the operator immediately notified the key holder of the incident.

Farsight kept both key holder and fire brigade updated on how the situation and fire were progressing, by keeping a close eye on the incident via the CCTV camera. The key holder soon arrived on site to provide access to the fire brigade.

By 21:14 the fire was safely put out. The key holder was delighted with Farsight’s response to the incident and praised the operator’s determined efforts and attentiveness.

If the fire had been left to get out of control, and left unverified with the emergency services, the site’s assets would have been at serious risk.

Once again this incident goes to show how remote monitoring and a vigilant alarm receiving centre can prevent businesses from losing thousands of pounds in damage. Although CCTV and security surveillance are normally associated with preventing criminal damage, this incident highlights how CCTV works to prevent damage of many different kinds – including fire damage.

Image: Creative Commons “My element, fire” by aztlek licensed under CC BY 2.0