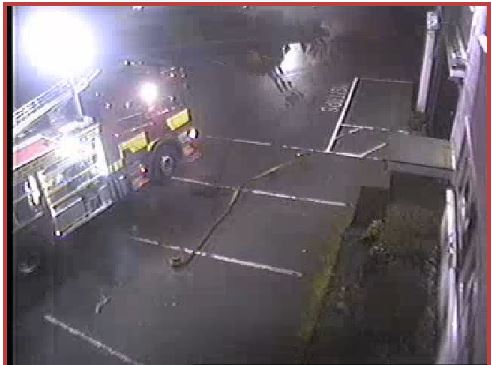 We don’t always get alerts for break ins. Sometimes it’s something completely different that sets off the alarm – which is exactly what happened for one Farsight client in February.

Farsight received an alarm at 11.14pm in one evening in February, which showed large white particles falling from the sky above a factory in Stoke-on-Trent, which at first appeared to be snow.

The operator continued to view the live footage with concern, and within a minute noticed that some of the particles were now on fire. Flames were then seen in the corner of the footage, confirming that it was a fire.

It was now immediately obvious why the alarm had originally been set off and that what had appeared to be snow, was in fact debris from a fire. Without hesitation the operator quickly called the emergency services, which dispatched fire engines that arrived on site within 10 minutes.

With the fire crews on site, the source of the fire was quickly established to be outside the company’s premises. Even though the fire had started on the adjacent plot, the prevailing winds were driving the flames towards the office buildings.

The quick thinking actions of the operator reduced both the extent of the damage and also saved valuable items within the office buildings. An employee from the company commented on Farsight’s actions, stating, “If Farsight hadn’t acted as quickly as they did, then the whole office block and adjoining factory could have been engulfed by the flames. We are in fact extremely grateful.”