Home » News » Celebrating the opening of the Optex EMEA HQ

On Friday 20th June a few of the Farsight team were delighted to attend the official opening of Optex’s European, Middle Eastern and African (EMEA) Headquarters in Maidenhead, Berkshire.

It was a fantastic event that brought together many branches of Optex from all over the world, whilst celebrating the innovation, expertise and continuing global growth of the industry leading manufacturer of security hardware.

Since 2007, Farsight has been a subsidiary of Optex. We were delighted to receive an invitation to the official opening ceremony, and our IT manager, Joel Babb; senior operations manager, Malcolm O’Shea Barnes, and financial manager, Vic Kulesza all attended. Alongside, them representatives from all over the globe joined in with the celebrations. 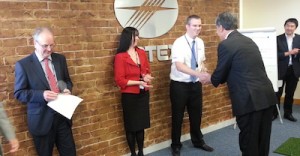 One attendee even travelled the 5,300 miles from California, USA to Maidenhead!

The open day began with various presentations from representatives of various regions within Optex’s EMEA lanscape. Amongst the audience of keen listeners was Ted Kobayashi, CEO of Optex.

Each presentation provided insight into the challenges and opportunities of each region covered in Optex’s EMEA business plans. That meant a look at the target market for each region and the operations employed to reach that market. Most importantly, however, was a continued focus and emphasis on innovation within Optex, around the world.

Without a doubt, innovation is a factor that has set Optex well ahead of its competitors in the security hardware industry. They innovate to encourage growth, strengthen their market positioning but also to provide the customer with cutting-edge technology. Around the world Optex develop new products whilst continually reassessing their current products to discover new uses.

After the presentations from Optex’s regional EMEA representatives, Kobayashi San expressed his thanks to the presenters and welcomed the continued focus on innovation. 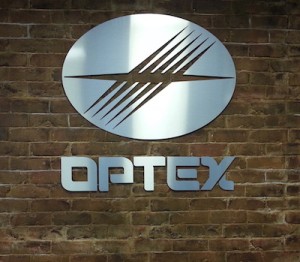 Kobayashi San then announced the beginning of the opening ceremony with an inspiring speech about Optex, the philosophy of the company and its vision for the future.

This led into individuals from around the world being introduced to the delegates with a selection offering speeches of thanks to Optex and Kobayashi San. In the celebratory spirit, an award ceremony was announced with three delegates receiving an appreciation award for the role they played in operations surrounding the launch of Optex EMEA and the brand new headquarters.

The headquarters were then officially opened and announced as ready for business! The delegates enjoyed the opportunity to network and meet their global Optex colleagues, with an exotic buffet lunch for all.