In the early hours of Tuesday 14 July 2015, a highly unusual and dangerous incident occurred at a petrol station forecourt in a suburb of Birmingham. The site has the very latest forecourt monitoring, analytic cameras installed – cameras that are designed to identify threats and categorise them according to type.

On the night on 14 July, the cameras identified unusual activity on the forecourt and categorised it as two pedestrians without a vehicle.

As a result, an alert was immediately sent to Farsight’s control room where our trained security professionals responded. With the cameras having identified the threat, the operator was able to start monitoring the site rapidly and with some knowledge of what to look for and expect. 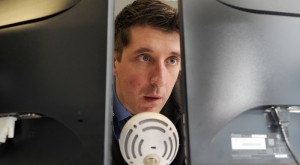 Recognising that the pedestrians posed a threat to the site, especially in the high-risk environment with flammable liquids, the Farsight operator disabled the petrol pumps.

Thanks to the technology in place on site and at Farsight, operators are able to remotely disable petrol pumps to minimise risk. Farsight are able to disable the petrol pumps through controlling a relay that disconnects the power.

However, the individuals continued to tamper with the pumps – going from pump to pump, removing them from the reciprocal and tipping them upside down.

It was clear that the individuals were trying to find and ignite the last dregs of fuel in the nozzle. After several unsuccessful attempts they found a nozzle with just enough fuel in.

At this point, the Farsight operator could see the incident was extremely dangerous, so immediately notified the police.

While one emptied the nozzle on to the ground, the other held a lighter dangerously close – and the fuel ignited immediately.

Shocking even the intruders, the flames shot up to the height of their knees. Both individuals recoiled and panicked – stamping out the fire.

On the phone to the emergency services, the operator was explaining the scenario to the police when the fuel was ignited. As a result both police and fire brigade were dispatched to the site.

After stamping out the fire, the reckless individuals escaped into the night – with the emergency services arriving moments later. The police and fire brigade reported that the site was now secure and undamaged.

This incident goes to show why remote monitoring is so important at high-risk environments like petrol stations. Without the intervention of Farsight operators the results of this incident could have been much, much worse – the pumps may not have been disabled and the individuals could have ignited a huge amount of fuel.

Indeed, the role of video analytics in petrol station security is proving critical time and time again and that goes to show in the 68 per cent increase in the number of Farsight monitored petrol stations using the technology from 2011 to 2014. You can find out more about these statistics in our news: Making unmanned forecourts a safe, and popular option.