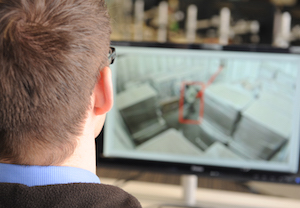 Analytics camera equipment and the expertise of Farsight operators have worked together to prevent a break-in, at a site in Ardenwick, Manchester.

The analytics camera equipment can pick up on unusual activity on a site, whilst also raising an alarm and highlighting the cause of the alarm to the security operator. In this case, an alarm was raised in the early hours of Friday morning. The footage from the analytics enabled camera flagged up the cause of the alarm – and the expert Farsight operator immediately recognised that action had to be taken, and quickly.

The operator’s in-depth knowledge of the site meant he knew this fire door was a ‘weak spot’ of the site – a potential access point for unwelcome visitors. In fact, prior to the site being monitored by Farsight, criminals had previously exploited this weakness.

The Farsight operator acted quickly: he issued an audio warning to the individual, warning them to leave the site immediately as the police were being notified. At the same time, the operator contacted the police – making them fully aware of the situation.

Within minutes the police arrived at the premises, stopped the intruder in their tracks and arrested them.

This case shows the two-fold benefits of Farsight Security Services. Our operators are experts in what they do and dedicated to the protection of premises under their supervision. They know their premises, and their video analytics, allowing them to provide the best security for vulnerable sites. Not only that, but Farsight Security Services are experienced in using video analytics and working with analytics camera equipment, which can be used in real-time (as in this case – known as forensic analysis) or after an event to analyse how the occurrence took place.

You can find out more about the intelligent video analytic services we offer here. As you can see, it can make a real difference to the protection of your premises!