Experiencing loss or damage to vehicles causes major disruption and upheaval. As a leading remote security monitoring station, we have witnessed a surge vehicle theft attempts over the past year or so. In this article we reveal the shocking statistics showing the number of cars reported stolen as well as related vehicle crime where criminals are targeting private and business assets across the UK. It is not just thefts of ‘whole’ cars, vans or commercial vehicles either, as we have seen a massive surge in car parts theft attempts – including catalytic converter thefts and modern LED headlights too.

As we all race into 2021, proactively protecting our premises, people and assets from theft and malicious damage remains a key priority for most or should be. Vehicles are obviously of particular importance whether for personal or business mobility. Following a series of articles exploring vehicle crime and theft trends that we are seeing unfold across the UK, Farsight examines exactly how many vehicle crimes and cars reported stolen there were in 2020.

How many vehicle crimes were reported in 2020

According to figures collected by UKCrimeStats the number of vehicle crimes reported to police in 2020 across England, Wales and Northern Ireland were a staggering 343,669 (see below).

How many cars were reported stolen in 2020?

Auto Express recently published figures from the DVLA obtained by Rivervale Leasing via a Freedom of Information request that revealed a whopping 74,769 cars reported stolen 2020. That’s an average of 205 vehicles being stolen every day in 2020 (including motorcycles) or 1 vehicle stolen every 7 minutes, which is almost 20,000 more than in 2019.

Sadly, these figures buck the assumption that vehicle thefts would decrease as an affect of the Covid-19 restrictions in 2020.  In fact, pandemic-related economic impacts may be a big part of the cause.

Another common assumption is that the majority of vehicle thefts are down to ‘joy riders’ or opportunists stealing cars for a specific purpose and then dumping them. However,  according to the most recent Office for National Statistics report on vehicle-related theft, only 72 per cent of stolen cars are ever recovered – combined with the fact that there has been a stark increase in keyless car thefts requiring the input of multiple thieves to carry out ‘Relay Attack’ techniques – it is far more likely to that organised gangs are driving the surge in the number of cars reported stolen.

AutoCar’s article entitled ‘Why are car thefts still on the rise?’ describes how criminal gangs are increasingly recruiting so called ‘clean skins’ – young people with no criminal records to steal cars. Often these stolen cars are driven to places and left for up to four days to establish whether they have tracking devices fitted.

Clive Wain, head of police liaison at Tracker is quoted as stating that cars are stolen for one of four reasons:
1. For export, often to Eastern Europe
2. To order, for their identity to be changed for resale in the UK
3. For parts, where the vehicle is stripped down in a ‘chop shop’
4. To be used in further crimes.

Police are going to extraordinary lengths to tackle the organised criminal gangs that are driving the ‘vehicle theft industry’. Recently, about 400 police officers from the Met, Essex Police and Transport Police services ran a joint operation with raids across the county as part of an investigation into thefts of cars worth a total of up to £4m.

Motor thieves are stealing some of Britain’s most in-demand cars and selling them on the black market for as little as £1,000, according to AX’s latest investigation. This report reveals the shocking black-market of vehicles once stolen.

This is cited as a typical car thief’s shopping list:

Vehicle Theft is an industry run at scale

Neil Thomas, director of investigative services at the fleet management company – AX Innovation describes modern car thefts as ‘an industry run at scale’. High-value models are being targeted by criminals who need specific cars to sell or to strip for sale or cloning. They even place their order with an ‘associate’ using an encryption messaging service such as WhatsApp. 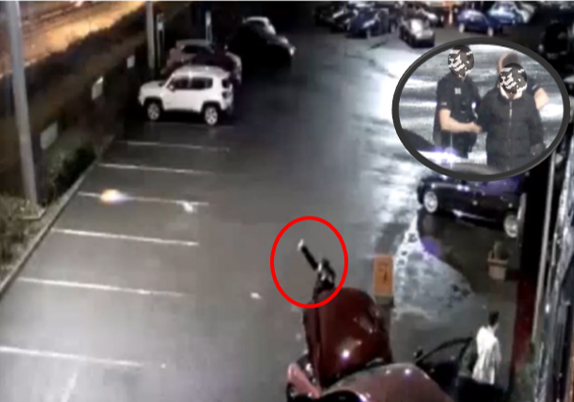 The above image is from an incident caught on CCTV by Farsight where these car thieves were taking pictures of vehicles at a car dealership forecourt as they attempted to ‘steal to order,’ moving from car to car to make the right choice –  before police were called in by Farsights’s CCTV operators to arrest them that is!

The study was compiled from information provided by 20 of the 33 UK police forces, so only gives a partial national view. Of the forces that responded to this study, Warrington, Wolverhampton and Coventry have seen the biggest YOY increase in catalytic converter thefts, rising by 2,700%, 1,475% and 652% respectively. Read more about catalytic converter thefts in our article here.

What is the true cost of vehicle theft?

In our previous article: A vehicle is stolen every nine minutes in the UK we revealed that according to the Association of British Insurers (ABI) vehicle thefts cost insurers £379 million a year. making vehicle thefts a key contributor to continued rises in insurance premiums according to GoCompare.

However, this does not factor in other associated costs that are considered in a Home Office report entitled ‘The economic an social costs of crime’ . The report considers three main cost areas:
• Costs in anticipation of crime, for example insurance and defensive expenditure including burglar alarms, CCTV equipment & monitoring, access control and other security measures.
• Costs as a consequence of crime, for example the cost of property stolen or damaged.
• Costs in response to crime, for example costs to the police and criminal justice system.

A high proportion of vehicle thefts are from car parks, business sites such as vehicle retail forecourts, vehicle rental sites as well as plant equipment premises, transport & logistics firms  and agricultural businesses.  It is not just the cost of replacing stolen vehicles that businesses have to consider though – the disruption caused can be crippling for many businesses with working vehicles out of action, stock loss and even missing equipment.  Not to the costs of repairing damages to property caused from intrusion.

Vehicle thefts of course don’t just involve cars, but motorcycles, vans and even plant equipment.  This is evident in the 50% rise in construction site intruders during lockdown,  a 45% increase on van thefts over the past four years with 10,000 thefts in 2018-19 and the national average of 1 in every 46 motorbikes being reported stolen.

Many businesses are having to rethink their security as outlined in our recent article looking at what crimes are affecting UK businesses. Read Who is watching your business security?

How can businesses better protect their vehicles and premises from theft?

Criminals, whether part of organised gangs or opportunists don’t make it easy, especially at night when most businesses are closed.

Simon Williams of RAC Insurance acknowledges that, “Criminals appear to prefer stealing vehicles at night” and “The three biggest factors that determine whether a car is stolen come down to how it is secured, where it’s kept and the time of day.”

In our experience, by combining CCTV monitoring with live, proactive audio warnings can be particularly effective in deterring vehicle crime incidents before they progress. In fact, during 2020 Farsight CCTV operators issued a mammoth 119,901 audio deterrent warnings and progressed almost 10,000 incidents to blue light services demonstrating a proactive security deterrent approach rather than a retrospective one.

Optimise your security with Farsight

As a leading UK based remote monitoring station, Farsight works with security systems installers and business sites across a wide spectrum of industry sectors to protect their premises, assets and people with our range of security monitoring services.  Our services Include:

We can help to protect what’s yours from theft, fire or malicious damage…

Farsight have collated some helpful recommendations and suggestions:

Where to position your CCTV cameras

Why security lighting makes all the difference?

What are audio warnings and how do they work?

15 factors to consider when choosing a remote monitoring station